With a deep, deep sadness, these are the last pools I swum in this fabulous city. I’ll be back. Rest assured, I’ll be back.

This place is enormous. One large pool and one simply massive one. I estimate it to be 70m across, at least. Off I swam and it was a struggle, having grown accustomed to 25m (or yard) indoor pools where I’m called upon to perform a tumble-turn every dozen strokes or so.

There was no one there either, seemingly, so, post-swim, I got chatting with the lifeguards/security/plain-clothes policemen and I raised the delicate issue of the presence of security and cops at many of the New York pools. Seems, in days past, gangs have sought to settle scores at these oases of leisure and pleasure. They’re free you see, so everyone comes in and sometimes things get out of hand.

Then you have the individual who came in and used the pool to do his washing. It’s free, you see. He couldn’t be reasoned with, apparently.

Well, there were no such shenanigans on the day I swam Highbridge. Just a lovely swim and nice staff too. 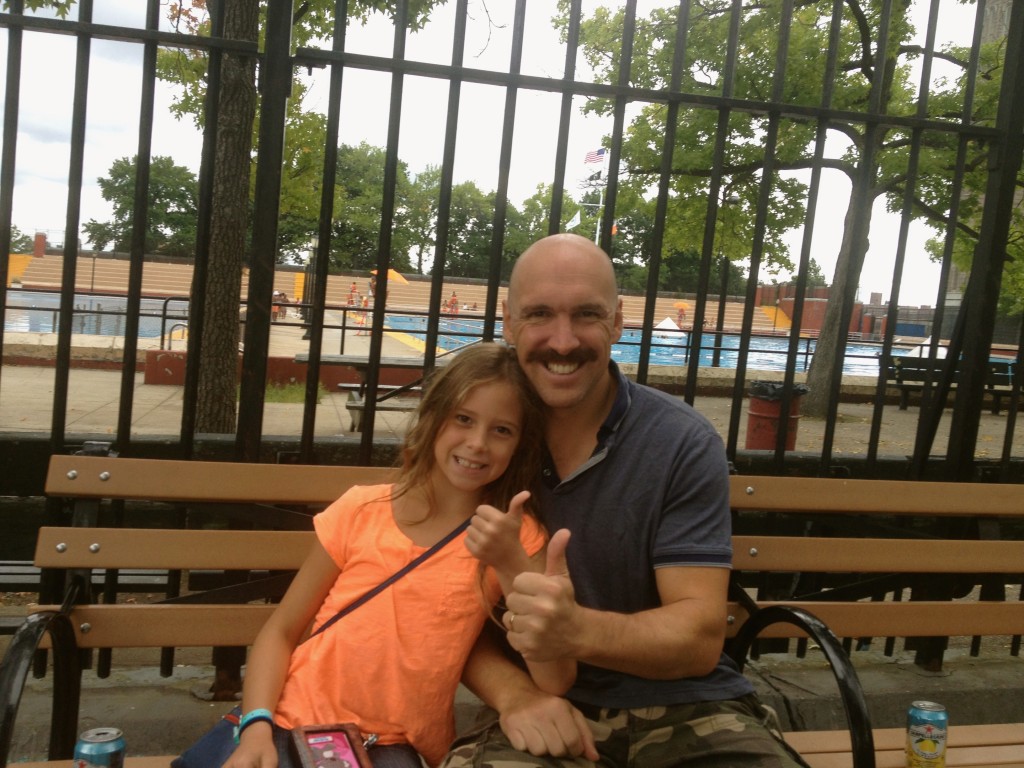 I’m rarely thwarted when I have a pool in my sights and I turn up with conquest on my mind. But Major Wagner (the wretch) foiled me once and nearly a second time too. Let me relate.

The first time, I turned up post heavy rainstorm. I’d organised my day around this swim so you can imagine my poor mood when I arrived to find the pool shut. ‘No one’s turned up all day,’ the staff explained. I, indignant, protested. ‘You can’t simply close the pool when you feel like it!’ But it turns out, they can. And a female police-officer appeared from behind a wall like magic just to make sure I didn’t insist they reopen it.

Then, while I fumed, the staff proceeded to tell me how lovely my accent was. ‘Are you from England?’ they cooed. (I get it a lot. I have a cultured tongue, you see.)

On my second visit, I was really up against the clock. I knew when they were shutting and due to a mix-up with the trains or one too many drinks at lunch, I arrived with only 20 minutes to spare. I blazed. Truly, I did. I even cut short a dialogue with a not-unattractive Jamaican girl who was complementing me on my tumble-turns (I don’t make this up, dear reader). I ignored the lifeguard’s whistle twice and got the K done. 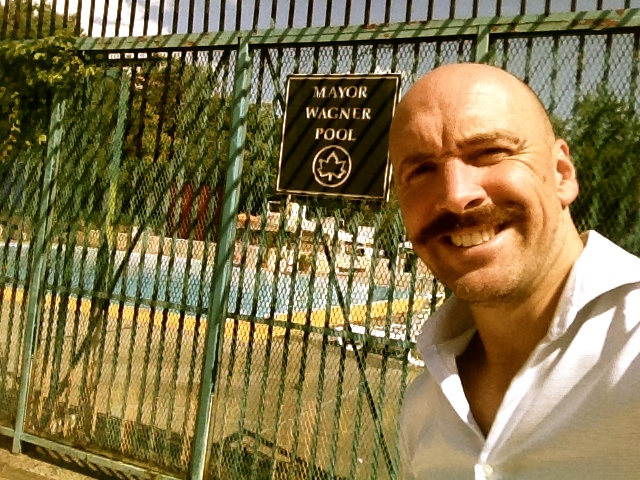 A friend alerted me to the existence of this incredible pool floating (yes, really) in the East River. We hired a car for the day, as the South Bronx isn’t the kind of territory you want to be wandering around and Baretto Park is hard to reach. That said, the park is perfectly nice and the pool is a wonder.

It’s built on a decommissioned river barge and you’re very high up. In winter it floats away to somewhere on Long Island where it hibernates. We were pretty much the first people there the day we swum and had the pool to ourselves. I tried to get a photo on it, but they were very insistent about no phones or cameras. Goggle it and you’ll see what a special pool it is.

I think I’d like to own a floating pool. I’d take it all the way around Australia. 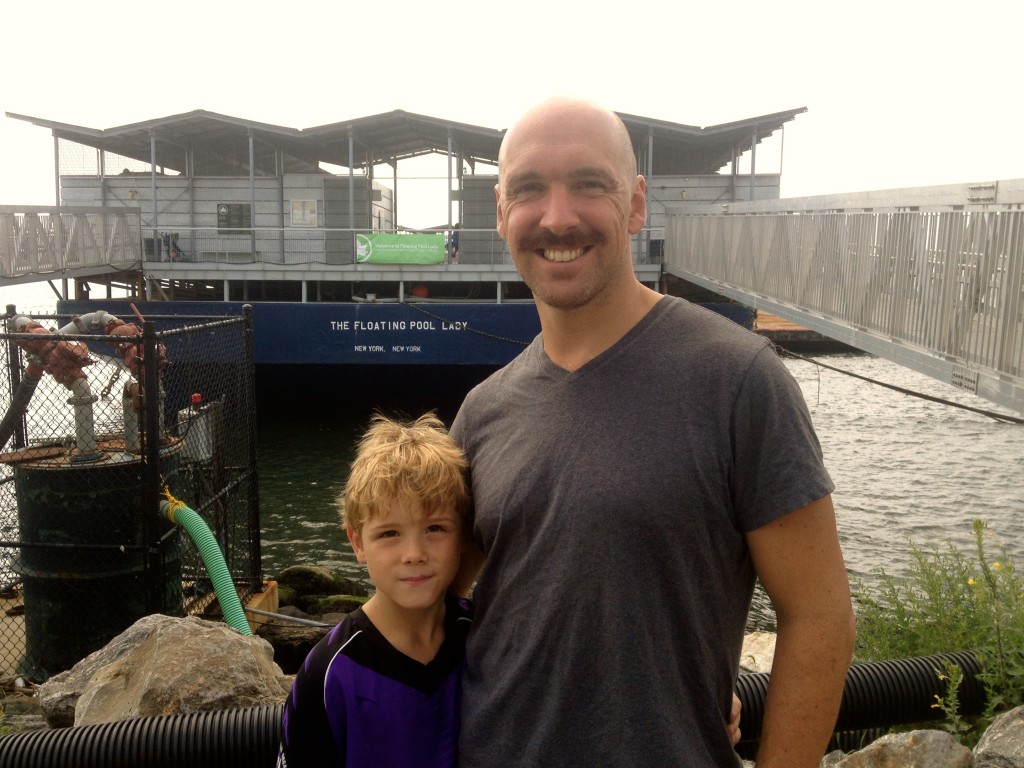 In my two years in New York, I’m ashamed to say I had very little to do with Staten Island. Once I caught the ferry there – it’s free and you get fabulous views of the Statue of Liberty and back to Manhattan – but then turned around and immediately headed back. In my defence, the area around the ferry island certainly don’t look much like Tahiti.

This time, I ventured further. On foot too, to Lyon’s pool. It’s a big one overlooking New York Harbor and on the day I was there a good number of lap swimmers were carving up the water. There are other pools on Staten Island. I didn’t get anywhere near them. One day. One day. 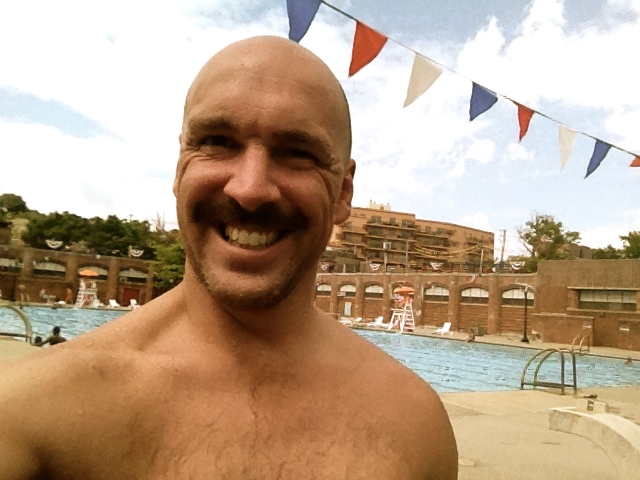 A friend gave me a guest pass to this Club and it was very nice. Carpeted locker rooms, white towels, after shave. And the pool had a view north up Columbus Avenue.

I had to sit through the interview process about what I was looking for in a gym/club, and it’s a lovely facility but with less than 2 months left on my New York stay, I knew I wouldn’t be seeing them again.

So I swam, smiled and got out of there. 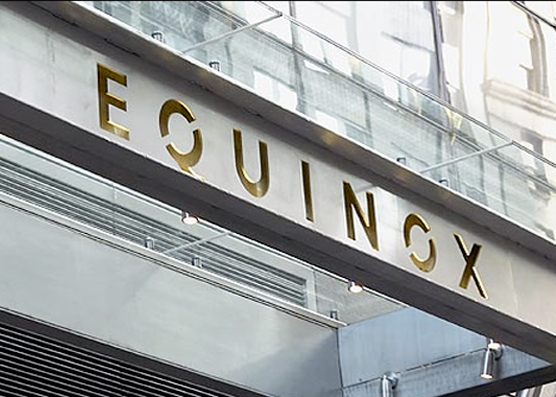 This was the final pool I swam in NYC.

Roosevelt Island’s a strange place. Between Manhattan and Brooklyn in the East River, it’s hardly on the tourist maps and other than its views of Manhattan there’s not a lot of reason to go there. Unless there’s a pool there.

Had real trouble finding it. Walked half the island and it was a cold day, but ended up back where I started (at the subway) and headed south. It sits just next to the Queensboro Bridge and is hidden away. Even the door is hard to find.

But find it, I did. And conquer it, I did, and thus my final pool for the US and the 36th for New York was done. 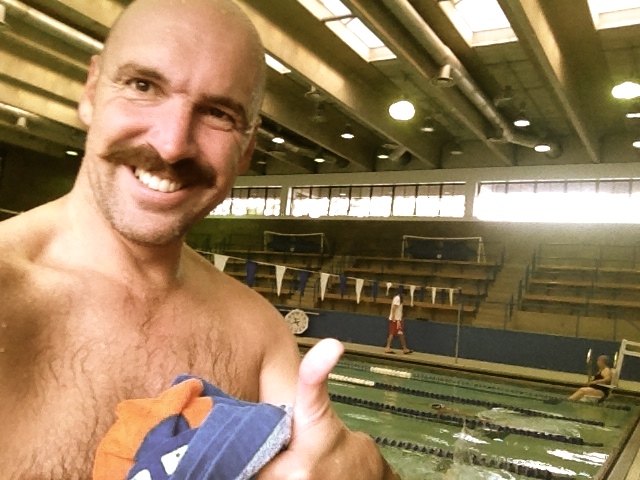